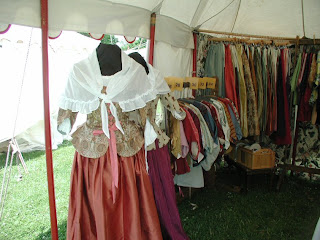 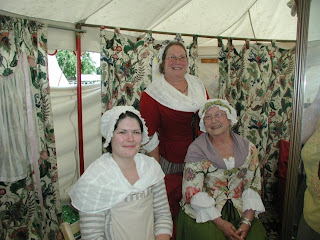 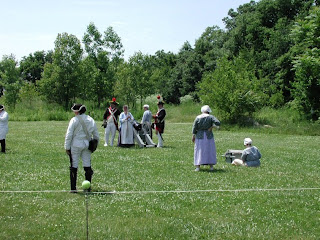 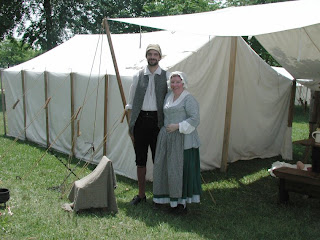 Last weekend I traveled back in time to the 18th century. You heard me correctly and I didn't even use a time machine. Cool, huh? My husband and I attended the "Klash On The Kankakee" for their "Grand Encampment". The Revoluntary War Reenactment was put on by The Northwest Territory Alliance, www.nwta.com. There were two Fife and Drum groups, River Valley and Theatiki, who played outstanding period music and rousing marches, an artillery demonstration complete with LOUD, exploding cannons, a tar & feathering,(not so much fun for the poor gentleman) a multitude of British and Colonial soldiers and a large civilian encampment where my friends, Dawn, Vaughn and their daughter Dori, were camped. There was even a section for the merchants who sold everything to outfit an 18th century reenactor. Turkey Roost Traders (www.turkeyroosttraders.net) who are Purveyors of Fine Wearables and Wm. Booth, Draper who sells woolen, flax and hemp fabrics (www.wmboothdraper.com)were some of the fine merchants that were selling their wares. Everyone was dressed in WONDERFUL 18th century clothing. What a feast for the senses. The campfire smoke wafting on the breeze,the food cooking on those fires teasing our taste buds, rows and rows of tents with all the costumed participants going about their 18th century lives and the music filtering thru the trees made me believe I had left the 21st century behind. Life back then was basic and simple. Despite the hardships, the ever present dangers, the lack of modern conveniences and the extremely hard and physically challenging work perhaps our 18th century ancestors could teach us a thing or two about what really matters in life; Family, our religious beliefs, a strong work ethic, our country and it's ideals and being a part of something greater than ourselves. Not a bad history lesson.

First two pictures are from "Turkey Roost Traders" tent.
Third picture are the colonials firing their cannon.
Fourth picture are my friends Dawn and Vaughn and their tent and camp.

FOR THE LOVE OF OLDE WORDS

I love words. I especially love olde 17th and 18th century words. Their definitions and usage are fascinating. I am sadden that today they have fallen out of favor soooooo every now and then I will post an olde word along with it's definition. Try using them in a conversation and see what happens. You may even impress your friends or at the very least they may think you are little strange. Have fun with them.

GYNECANDRICAL (adj.) - Mixt or promisciuous dancing. Men and women together. In 1684 Increase Mather deplored. "There are questions regarding gynecandrical dancing or that which is commonly called mixt promiscuously dancing viz men and women together. Now this we affirm to be utterly unlawful and it cannot be tolerated in such a place as New England without great sin".* 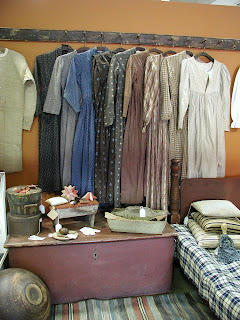 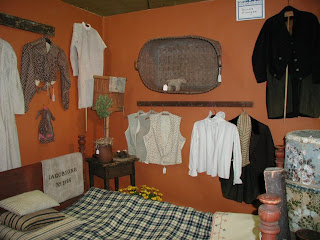 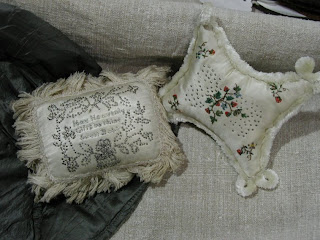 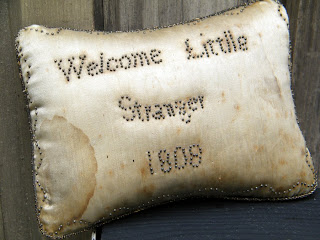 The Heartland Antique Show in Richmond, IND was this past weekend and it was a huge success. I got to visit with old friends and I had the opportunity to meet some new and wonderfully interesting people. That is a BIG plus in this business. People travel from all over the country to attend antique shows. They come from different backgrounds and live very different lives but we share a common thread and that is the love of antiques. For a brief day or two we talk about those antiques, our collections, our houses, our unique decorating styles, our gardens, our 18th century or Civil War reenacting groups or we just share funny stories. The outside world and all it's problems and worries melt away. Sure for us dealers it is a LOT OF WORK! A friend of mine, Susan who helped me do this show, (bless her heart) remarked to her husband, "They do a months worth of work in two or three days". But where else could you go and be with other people, both customers and dealers, who love what you love and are all under one roof? This time I met or should I say re-met a man who saw me at a Civil War show probably about 8 to 10 years ago. I spent time with a woman from South Carolina who owns and runs a B&B. And then there was a folk artist from Missouri who creates period correct gourd containers. That is just the customers. Every show always has new dealers or dealers that you did not have the chance to chat with in the past. They are a wealth of information. Yes shows are work but they are also FUN!!

While walking the show, I came across two little treasures. Some people call them infant pincushions or pillows, layette pincushions or welcoming pillows. Pincushions have been around in England since the 16th century or even possibly earlier. Welcoming pillows are a special type of pincushion and were at their height of popularity from the last quarter of the 18th century to the end of the 19th century or approximately from 1770 to 1890. They were square or rectangular in shape, larger in size than the standard pincushions which measured 2 to 3 inches, stuffed with saw dust or maybe even sand, covered with silk, linen or cotton and were decorated with stuck straight pins that formed either a design, a message/verse or both. Some were signed or initialed while others were not.

Shorter messages were more common such as "Welcome Sweet Babe" or "Welcome Little Stranger" Some messages reflect the high death rates of babies and their mothers.

"Bless the babe and save the mother"

"May He whose cradle was a manger bless and protect this little stranger".

Pins were made by hand until about 1830 and were extremely expensive. The pincushion itself was given as a gift after the birth of a baby. Since there was a high mortality rate during childbirth it was more prudent to wait to deliver the gift until after the child was born. There was also a superstitious belief that it could increase the mother's pain during childbirth.

"For every pin a pain" and "More pins, more pain."

After the mother received this lovely and extremely expensive gift, she went on to probably use the pins to fasten the baby clothes. The pins were dangerous. They would sometimes stick the baby causing pain, illness or even death. Older infants could remove the pins, possibly swallowing them and causing servere harm. Thank goodness the safety pin was invented during the 19th century but unfortunately they were not available until 1878.
The first and second pictures are of Donna Finegan Antiques' booth.
The third picture are two welcoming pillows from Perkins & Menson Antiques,
442 Main Street, Townsend, MA 01469 (978) 729-5423.
The fourth picture is a welcoming pillow from D. Finegan's private collection.
Posted by Finegan Antiques at 2:24 PM 3 comments: